How To Make Games For PC, Playstation, Android and IOS. Create Your Own Games Online

Learning how to make a game from scratch can be a very fun and rewarding process. With the rise of mobile gaming, people around the world are struggling to take advantage of this huge game market by making and selling new games. Different games for different platforms and operating systems are developed slightly differently, but they are all based on the same basic concepts.

You need to learn to code in at least one language, especially if you want to customize how it looks and how it works. Programming is the foundation of game development. That’s why the way to learn how to make a game from scratch is through programming.

Everyone who likes to play has always wanted to make a video game, at least wondering what it was like. Obviously, it’s no secret that coding knowledge is required to produce video games, but unfortunately these skills are not available to everyone.

So is there a chance to make games without knowing the code?

Unfortunately, there was no such option in the past, and only those who knew good programming languages could produce computer games. Nowadays, with both mobile games and retro games becoming fashionable, making games has become an easier and more common task. Today, hundreds of games are released every day on platforms such as the Google Play Store, App Store  and different independent games take their place on Steam. As a matter of fact, most of them are done by people who do not know computer programming languages and only use ready assets. With the programs we will be talking about, you do not have the chance to make great-looking games with huge content, but you can still create addictive, popular games.

Probably, none of the tools in our article are as widely used and popular as Unity.

Not only does Unity support an incredibly wide range of platforms, it also comes with its own integrated development environment. There are many companies that are interested in Unity, which supports a large number of ready-made templates and resources, where you can make both 3D and 2D games. 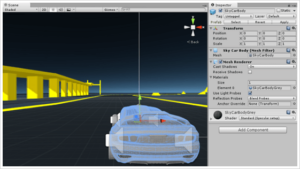 For example, Obsidian Entertainment, known for Pillars of Eternity, and inXile Entertainment, the developer of Wasteland 2, are currently using Unity. Facepunch Studios, which made Rust, and Press Play, producer of Max: The Curse of Brotherhood, are also among the independent companies that have moved to Unity.

Perhaps the best part of Unity is that it does not stick to one platform but appeals to all. With this tool, you can develop games for both mobile platforms and computers or make the game you developed for mobile devices ready for PC in a very short time.

The good news is that Unity offers a completely free use. But if you are selling your game and are making a good income, you have to pay for the Pro version of Unity. Of course, this fee will not be a problem for those who make a good game and sell it.