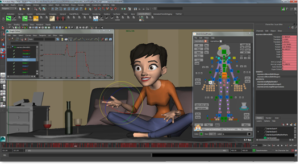 Animation is a method in which figures are manipulated to appear as moving images. In traditional animation, images are drawn or painted by hand on transparent celluloid sheets to be photographed and exhibited on film.

How to Make 3D Animation?

How hard can a short animated movie of 3 – 4 minutes be? I got into this business with this question and a concept that I had to improve myself constantly emerged. Our aim here is not to intimidate anybody.

There is no reason why everyone should not make animated films on their computers after they have enough information. Your work creativity and diligence are also hidden. This article is for brief information purposes, as the subject we are trying to answer covers a wide spectrum, only basic factors will be considered.

Computer animations are created by combining the flow of images created on the computer with specially designed programs. Many 3D and 2D animated films in your day make use of this tool. Contrary to popular belief, computer animation technique is not a new technique.

In fact, it was obtained as a result of using Stop-Motion and Classical animation techniques together. The most prominent advantage is that it can be intervened more than these techniques. You have no physical restrictions. Just 1 person can handle the very expensive jobs on their own.

Even the movie you made can be nominated for an Oscar. However, it has advantages as well as disadvantages. The need for technical knowledge, such as putting the character into the bone, writing scripts, constitutes an obstacle to the completion of creative work. Simple Animation LDPC will help you with this.

What are the 3D animation processes?

If you don’t have a script, it means you don’t have it in your movie. Without a script, you wouldn’t start a movie by saying that I will start a movie and then I will draw as soon as I think of it. You shouldn’t get out. A scenario with its introduction, development and conclusion sections is the first stage of all animation types.

The scenario can be 1-2 pages even for a short animated film, or it can contain 50 – 60 pages of information. This may vary depending on the subject of the movie you want to do. The screenplay helps you to take the film out of your head, write it on paper and make interventions there. The scenario creation process is a separate subject in itself, and courses are also given at universities.

As in all animation processes, the second important process in 3D animation is planning. The scenario and planning are like the foundations of the building you have made. The healthier they are, the easier it will be to keep your building afloat without collapse in future complex processes. Planning also depends on skills, time, budget, etc.

You create a summary of everything you will use and want to do based on variables such as. How many characters are there according to the script? Will these characters interact with each other, the places where the animation takes place, music, sound effects, etc. At this stage, you determine everything from the programs you will use with the information to the people you will work with. It is the most important stage for your planning animation.

Although it seems like a sub-item of planning, storyboard creation is considered as an item on its own according to the size of the project. Here is the animation we planned. We do not consider other factors for now. Creating a story board is the transfer of the images in your mind to paper with a pen according to the scenario in your hand.

Your scenes begin to occur in these writings and drawings. You decide everything that needs to be in the scene, such as the emotions you want to show in your characters, the camera angles according to the scene, the location of the character and objects on the scene. The storyboards of big animation companies are very detailed and are generally used for amateur vocalization.

We have come to the most enjoyable part. Your script is ready, your character sketches are ready, you have done your planning and now you are at the stage of creating what you have done on the computer. The modeling process for 3D animation has a variable structure according to your degree of detail. If it is your first movie, we recommend that you limit your character and space designs in this process so that you do not get overwhelmed in the later processes.

You should solve the details such as modeling your characters and the places where animation will take place, dressing the modeled 3D objects according to colors and textures in this section.

The most daunting and problematic technical process of the 3D animation process is the processes called rigging and skinning. If you are not an expert on this subject, you can grapple with technical problems that you cannot handle. For this reason, if you are designing a character, you need to adjust its anatomical structure and details according to your animation.

The more details, the more likely problems. Although there have been programs that make this process easier for artists recently, you can consult experts with script knowledge. The process called boning or rigging is the set of controls required to animate your character.

This character can be a human, as well as an insect, creature, car, airplane. Due to the difficulty of the animation process, you should use all the methods that will make your job easier in this process. While existing internal programs such as Catrig, Biped, offer limited possibilities, manual ossification for the needs will allow you to get a more successful result.

If you are working on a live character, you will also need to enter a face rig for interactions such as mouth and eyes. As I said at the beginning, this process is not easy and painful, but there are hundreds of training sets on the internet that show you how to rig it from start to finish. we suggest you move forward with help from these. I do not end my troubles with rigging.

After creating a skeleton, you can also turn it into flesh, and this hair can be the head. In short, it is the process of controlling your character. All the controls you create from the boning process must act synchronously with your character during this process. Your character’s polygon count, vertex count, anatomical accuracy, etc. Many factors will determine the duration of this process.

Once you have assigned the in-program controls of your character, which you put into bones and flesh, you can proceed to the next stage.

If you remember while planning, we talked about the audio storyboard. Here, if you have done audio storyboard work as an amateur in the planning stage, you will spend relatively more comfortable at this stage. In general, the voiceover can be added after the animation process, but if you have a talking object or a live actor, it is useful to get the voices according to the scripts you have prepared in the scenario. Because you will add facial gestures to your character during the animation process.

Animating a character and an object requires a long observation and dedication. In this process, it is the stage where you give life to your animated movie that you plan, and if you do not have enough knowledge and skills in the process, it is the process that may cause us to give up. Do not go through this process without getting the necessary information about animation. Do not forget that there is a whole branch of art in front of you.

Review basic animation concepts. Observe, experiment. This process can be divided into hundreds of sub-items. I think it is useful to go short for him. My aim is not to intimidate you, but there are many people who have completed many processes above and got stuck in this process. Issues such as timing errors, complexity of movements can tire you. I think that there is nothing you cannot do even if you work hard.

Capturing the image with lighting and physical calculations is the rendering process. The duration will be longer depending on the detail and quality of your scene. An animated movie 2.5 minutes long that displays 30 frames per second means 4500 frames of rendering.

Assuming that you render on an average single machine, and a film with an average quality and size of a single frame rendering time of 2 minutes, it should be shredded for 150 hours. Do not be afraid, Render Farms are allocated to you for this. These paid services aim to shorten the rendering process by combining 20-30-150 processor power depending on the size of the company. Don’t forget to render in certain parts of your scenes to avoid disappointment during this process.

If you’ve gotten to this point, take a sigh and make the final edits to your movie like visual effects and color touch-ups. Add your music. At this stage, it may vary depending on the detail and effect intensity you have requested. It is a process that you can complete relatively faster than other processes. Of course, as the quality and demands increase, the required knowledge increases. Programs such as After Effects, Simple Animation LDPC will help you in this process.

Where To Start 3D Animation

We recommend Simple Animation LDPC for you.