How To Make A Video Game At Home. Making Your First Video Game

What are the best programs to make your own game?

There are a lot of options out there but I’m going to be recommending three: GameMaker Studio, GameSalad and Unity 3D. Both of these have free versions you can use to learn from and get to grips with, and both produce games that are easily exported to PC.

They also run well on console (although that’s a step up from anything you’ll be doing anytime soon, due to the need for debug consoles and developer licenses).

Let’s take a quick run through each of those, and a few other options. 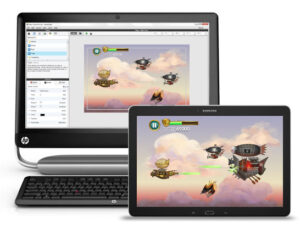 GameSalad is the revolutionary game development platform that allows anyone to create the game of their dreams with a sophisticated visual programming interface.

GameSalad Creator is an authoring tool developed by GameSalad, Inc. used by educators and non-programmers alike. It consists of a visual editor and a behavior-based logic system. GameSalad is used in over 223 schools for teaching computer science concepts, logic based thinking, and problem solving skills without all the pain of syntax.

GameSalad is used by consumers and creative professionalssuch as graphic designers, animators, and game developers for rapidly prototyping,building and self-publishing cross-platformgames and interactive media. The application runs on both Mac OS X and Windows computers. Access to a Mac is required for publishing to iTunes, but all other supported publishing platforms are accessible for both Mac and Windows users.

The easiest game design tool to build 2D games with no code. What are you waiting for? Open a new GameSalad Account, Download now for FREE and start making your own awesome game. 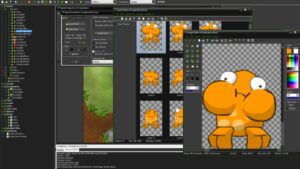 Strengths: One of GameMaker’s biggest strengths is its easy to grasp bespoke language. While some ‘real’ programmers might sneer at its simplicity, it’s fast to learn and create with, and as powerful as you need it to be.

With only a few simple commands you can get blocks moving and shooting enemies in a matter of hours. It’s a good gateway into coding as well as, while it doesn’t necessarily translate directly into other languages, it sets you up to understand concepts and structures that do. It also has a drag and drop icon-based programming system using pictures instead of words, but it really is best to jump straight to the freedom and flexibility of code.

Realistically, this is the best option if you’re just working on your own.

Weaknesses: GameMaker can also do 3D stuff but it’s not something it’s really known for, hence the majority of its games being 2D. GameMaker Studio 2 is also currently in beta so you might want to wait for that to release fully before diving in here. 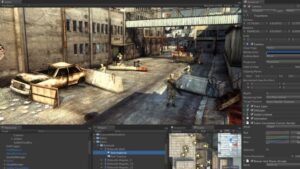 Strengths: Unity is the free engine many full sized studios like Ubi and Nintendo use to make games. Numerous titles you’ve probably heard of and played were made with this, and it’s hugely versatile. It’s predominantly 3D focused but recently upgraded its 2D capabilities to directly compete with GameMaker.

While there’s a focus more on ‘proper’ coding, basic tools like a 3D FPS controller exist as ready to use modules without coding, and you can block out and create something playable incredibly quickly with next to no code. The game also has a huge marketplace full of premade game specific modules to buy (although many are free). So controller stuff, animation, objects and more can simply be added in.

Weaknesses: You will need to learn some serious code. Unity runs C# and JavaScript which are both common languages used in a variety of applications. It’s not impossible to learn but far from beginner’s stuff. Unity requires mastery of a lot of skilled facets too, from 3D animation, modelling and more, making it best for teams. It is not a good choice for going it alone.

Unity, GameMaker. and GameSalad are the most popular options by far but not the only ones. Twine, for example, is incredibly popular for text-based games and can create playable narratives incredibly quickly. While things like Construct 2 and Clickteam Fusion 2.5 are good options if you absolutely don’t want to code and prefer to use drag and drop icons, but suffer some limitations as a result.