Then you’re in luck.

You can learn Spanish with songs and music.

You have fantastic Spanish podcasts at your fingertips.

And of course, you have a sea of apps for learning Spanish. 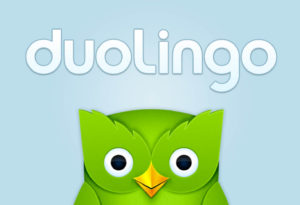 Among all the apps here, Duolingo probably has the highest ratings of all – it won the Best App Award in 2013 in both the AppStore and the Google Play Store.

Duolingo Spanish is split up into units that have a certain theme (e.g. education, work, medicine), and it’s designed so that each unit goes up in difficulty. Units are generally divided into two types: tenses and others (e.g. nouns, adjectives, adverbs, question words, pronouns, etc.). It’s very unique in the fact that it’s not grammar intensive – as a matter of fact, apart from about 10 of the most commonly used tenses, you won’t see any grammar lessons throughout the app.

Within each unit, there are sub-units. Each sub-unit covers about 7 – 10 words. Each unit can have anywhere from 1 – 10 sub-units.

Inside each sub-unit, there are six types of exercises that teach you these words, building on what you already know: the voice recording, where you read a Spanish sentence out loud after hearing a native recording; English to Spanish translation of a phrase; Spanish to English translation of a phrase; matching a photo to a word; rearranging words to form a sentence; and multiple choice questions.

There are about 20 questions per sub-unit.

Duolingo was designed to be quick to use, so it uses a very focused approach to distill lessons down to the bare essentials. What that means is if you can commit about 20 minutes of time every day to go through 3 – 4 lessons, you’ll be able to finish all the lessons in about 3 – 4 months time (taking into account word loss over time).

Overall, Duolingo really manages to teach Spanish in a simple way by honing in on the 1500 most important words that are most commonly used in daily situations. 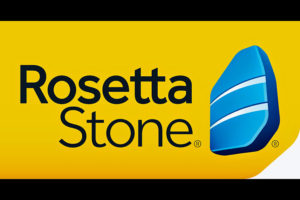 Among the 11 apps here, Rosetta Stone is undoubtedly the most famous learning methodology and sits as the oldest language learning app.

In other words, it’s trying to teach us Spanish the way we’d learn it if we were children starting to learn the language.

Within the platform, you’ll see that all words, phrases and audios are in Spanish – you’ll literally be getting zero translations to English. It’s that immersive of an experience!

On top of its learning component, it also has a platform where you can schedule lessons with a live tutor every other lesson. So if you enjoy practicing Spanish by talking to native speakers, this might be a great bonus feature.

Speech recognition within the platform has also been praised because it has been designed to specifically recognise pronunciation of non-native speakers. I’m sure you can relate – but when we’re learning a new language in the beginning, there are a lot of words we know but end up pronouncing in a weird accent, which can result in a raised eyebrow or a frown from native speakers. The enhanced speech recognition really helps offset this. 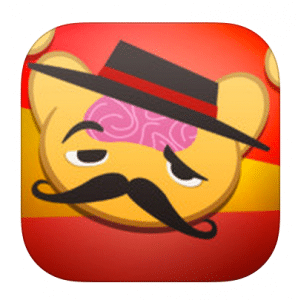 Among these apps, MindSnacks is probably an app that’s most suitable for Spanish learners studying Spanish in school.

MindSnacks is often a widely praised iOS Spanish app that treats learning Spanish as a game rather than being taught entire phrases and grammar points.

When you first enter the app, you’re taken to the homepage with nine games, and each game is based on content that’s centered on a certain theme, like food, home or school. 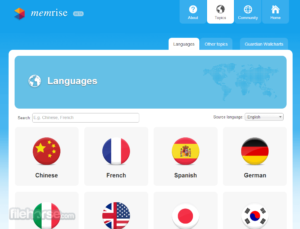 Memrise is a very unique language learning app. Unlike other apps, its sole purpose is to help you memorize Spanish words, hence the name “Memrise”. And in my opinion, it’s also one of the most creative iOS Spanish apps for learning Spanish words around. 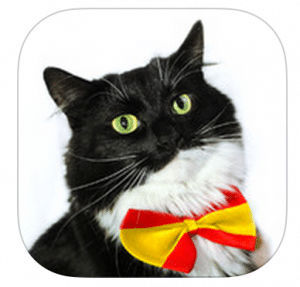 As an iOS app to learn Spanish, Cat Spanish is also one of the most unique apps out there.

A spin-off project by the same creators of Memrise, Cat Spanish is a Spanish app with a humorous slant: all the pictures, features and design are themed around cats! 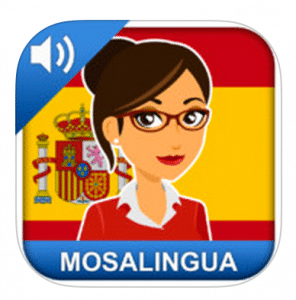 MosaLingua is a platform that is designed to teach Spanish using several efficient methodologies, such as SRS (which helps calculate review dates based on how difficult you find words as you learn them), focusing on 20% of the most important vocabulary, as well as ingraining words into long term memory.

I found the fact that it focuses on 3,000 most common words and phrases to be attractive – after all, the golden ratio really holds in many situations; you really only need about 20% of the language to get through 80% of daily situations. 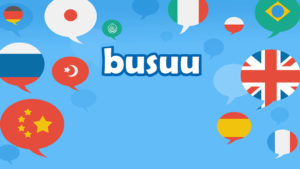 Unlike many other Spanish apps, Busuu has a vibrant community of active users. This also means that out of speaking, listening, reading and writing, Busuu is an app that has a big speaking component, so be prepared for a lot of oral practice.

In a nutshell, Busuu is an online Spanish learning platform, and like Open Languages Spanish, it divides up levels according to the CEFR.

Inside each lesson, it takes you through the lesson material in a well paced sequence.

We also recommend these 2 amazing ways to learn Spanish!